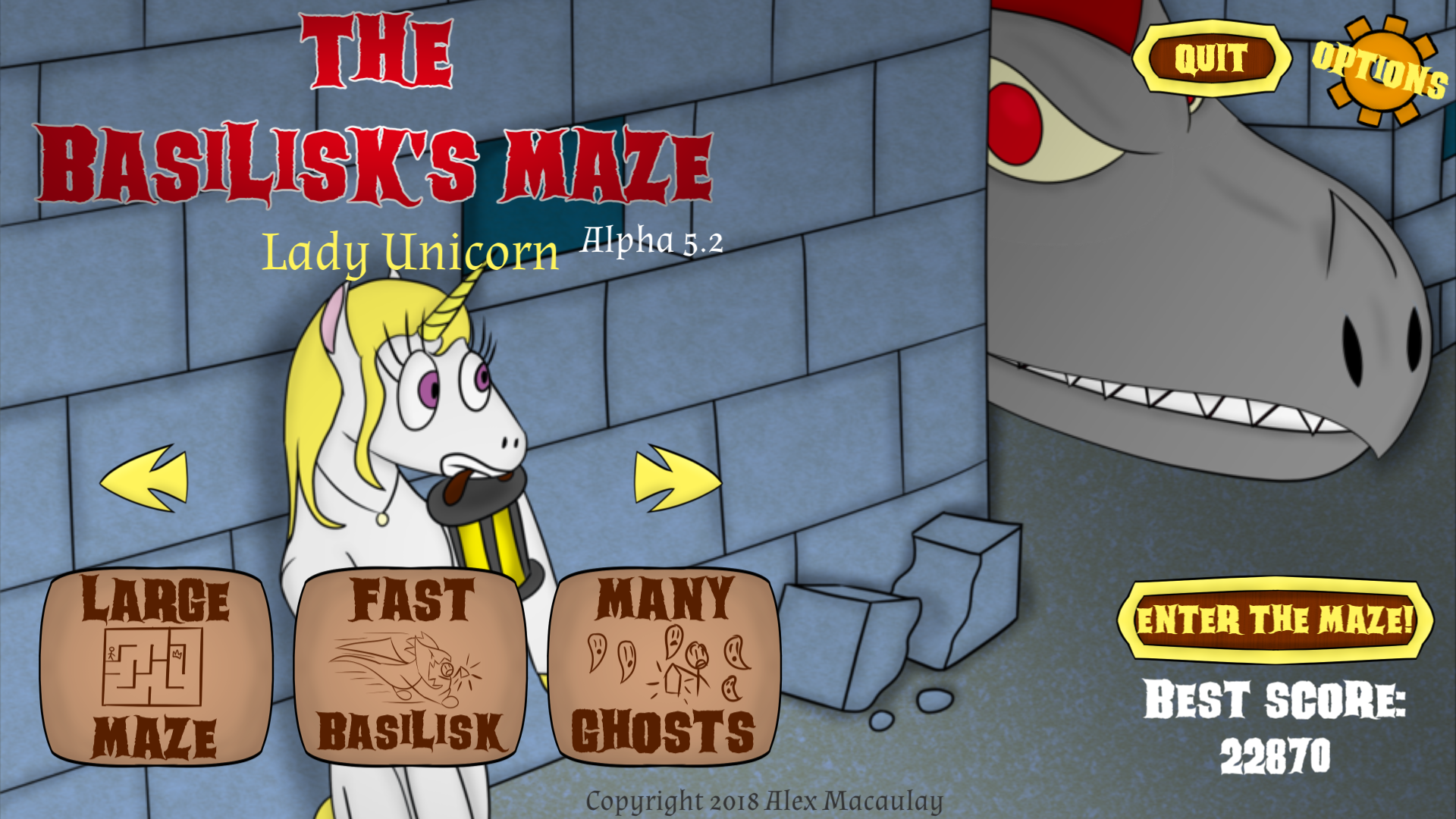 She doesn't look too happy to be here...

Hello again, for the final Alpha update for The Basilisk’s Maze! Hooray! Beta's almost here, but in the meantime, got a few new features to share! I’m going to try to keep it short this time, as I have a tendency to ramble on about these things. No new trailer this time, because I’m getting sick of making them. I do have some screens to show, though!

So, let’s get down to business. The main attraction this time are the three new characters which can be unlocked: Sir Minotaur, Lady Gryphon, and Lady Unicorn!

How do you unlock them? Well, that involves the other big (but less glamorous) addition this time: score tallying! At the end of a maze, you’ll be given a final score calculated from a few factors regarding your run. If you “got ate,” your final score is simply your total gold cut in half. If you escape, then your final score is your total gold, plus a time bonus (actually based off how many steps you took. Shh! Don’t tell anyone!), plus 500 points if Basilisk never saw you (i.e. the eyes thing never showed up), plus 100 points for every ghost you stepped on (I mean, you managed to escape even with those things slowing you down, that deserves something!). 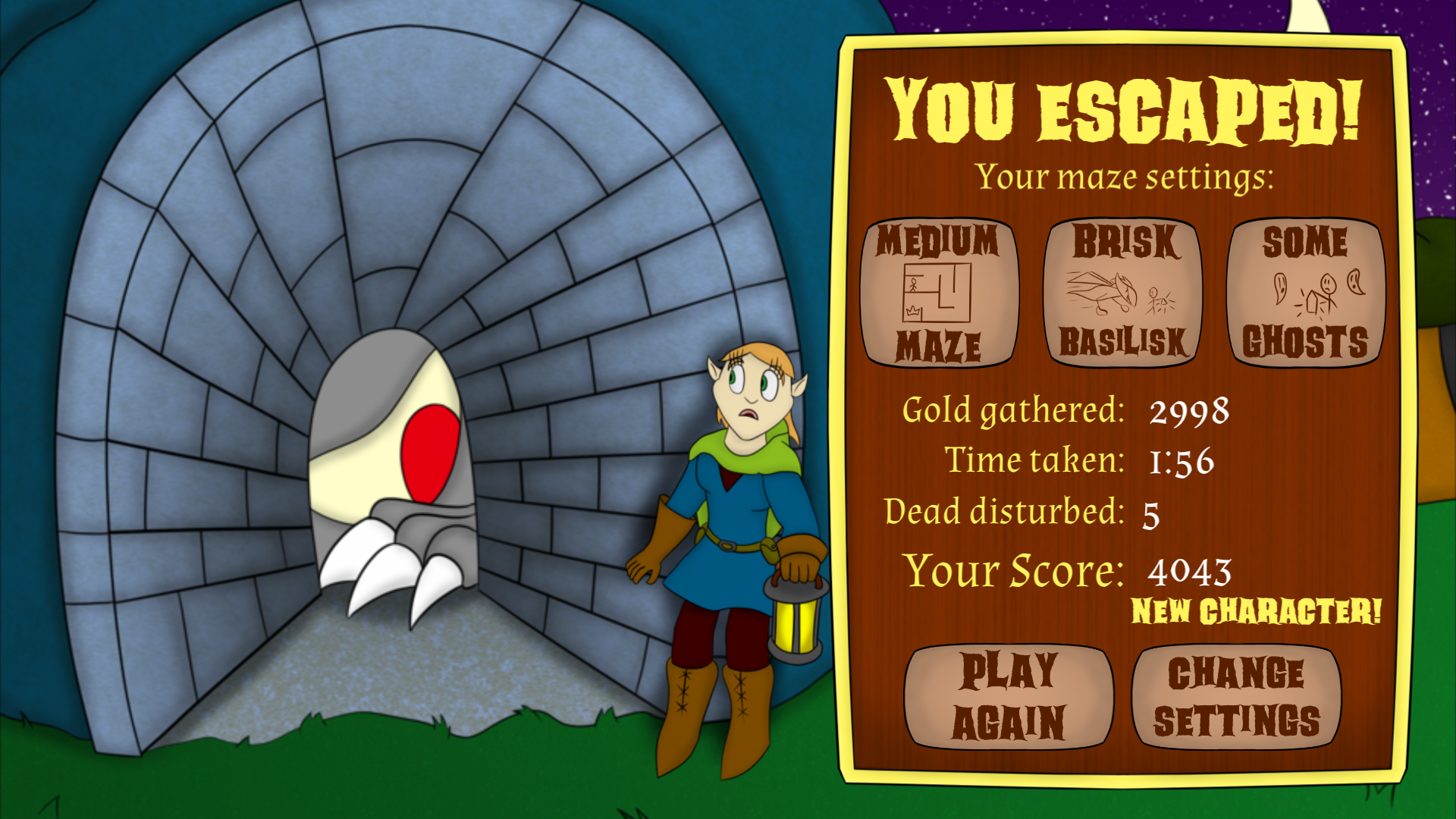 Oh yeah, I tweaked the win screen a bit, too.

If your final score is high enough, you’ll unlock a new character. Scroll to them on the main menu and hit the unlock button to reveal them. The game will then let you play as them! Your high score and the characters that you’ve unlocked are saved between sessions. 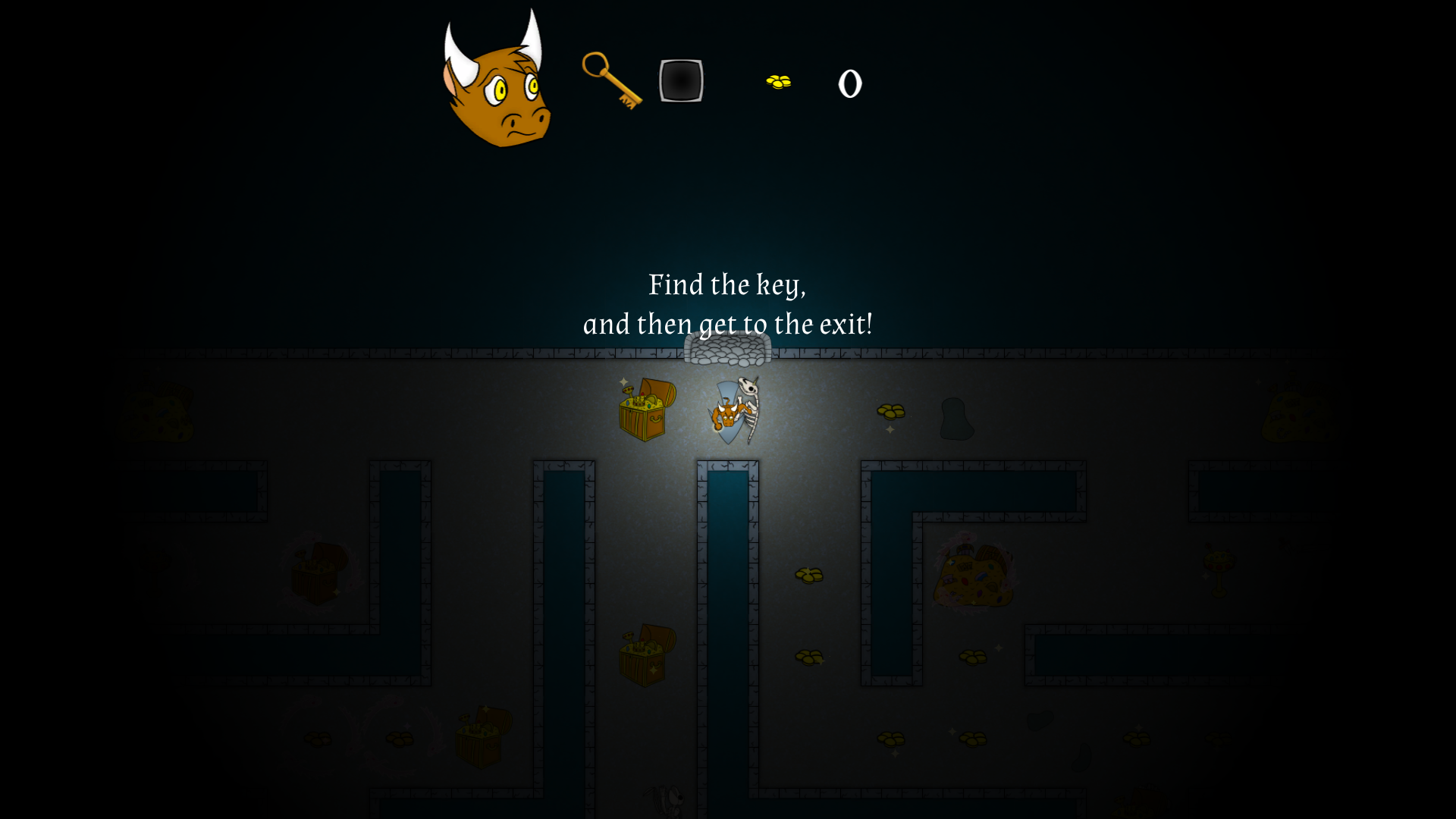 Usually, HE'D be the monster in the maze, but, well...

The last most visible change is a newly-expanded HUD. In addition to the gold counter that was already there, there's now a checkbox that tracks whether you have the key or not (the character does hold the key after collecting it, but that’s a tiny detail easy to miss) and there's also a portrait of your character showing their “health.” This indicator will give you a good idea how much you’ve been slowed down by Basilisk’s gaze and ghost scares. 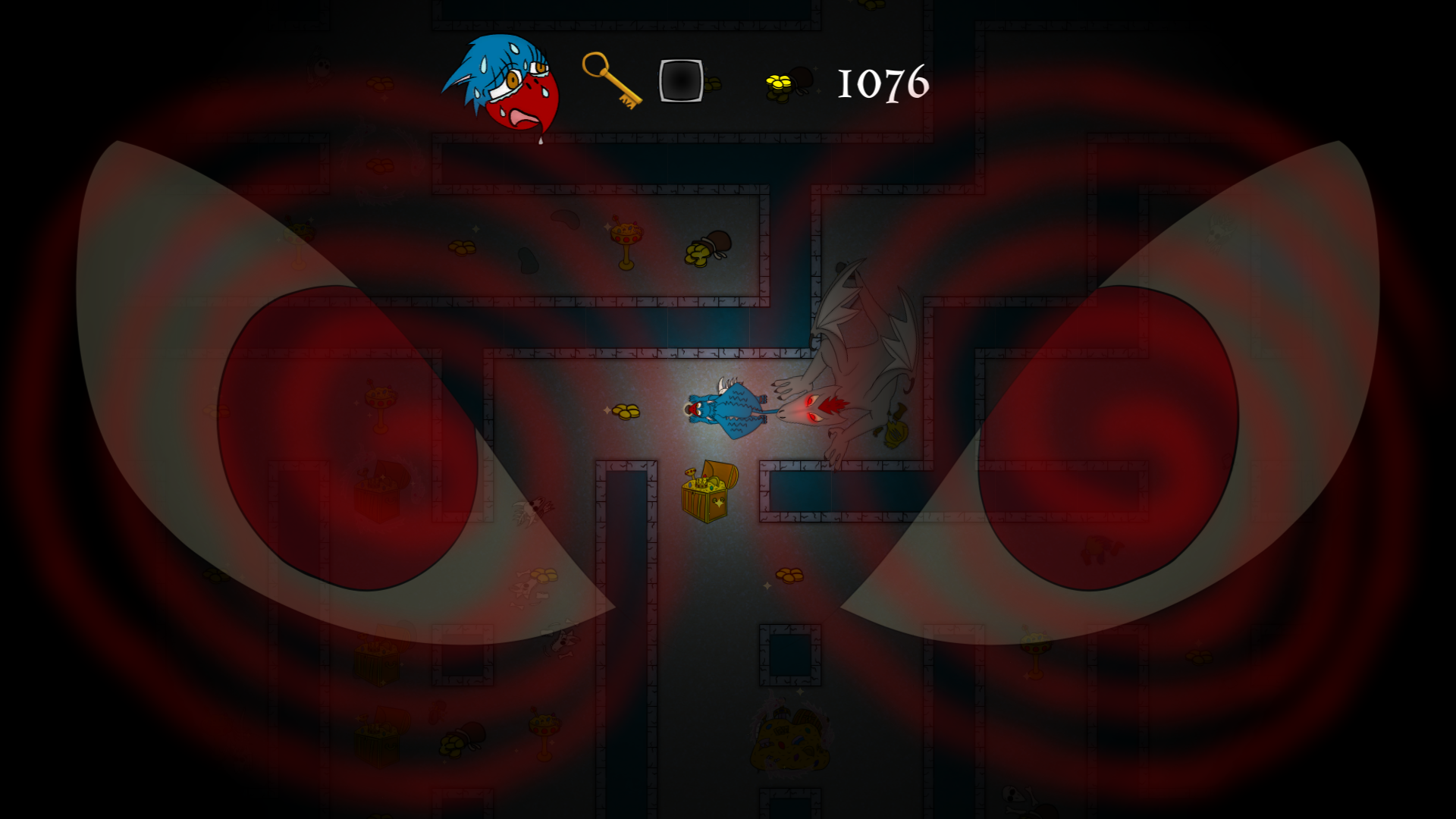 Here, we can see from the portrait that Gryphon is NOT doing well.

The portrait swaps between four images for each character; the more distressed they are, the closer they are to being overtaken by Basilisk. Luckily, an earlier update gave the character the ability to recover speed with each step, so if you keep moving and avoid hazards, you’ll gradually get your speed back to normal and get your character’s expression back from “utter panic” to “mild unease.”

Aside from that, there are a few gameplay changes made to ease up the difficulty slightly. After playing on maxed-out difficulty settings post-ghosts update, I found that the game was a tad too difficult for my tastes (I could barely win it, and I made the thing!). Firstly, Basilisk can’t turn around anymore unless the player tries to sneak up behind him. This was actually a feature in earlier versions of the game, but I forgot to implement it after fixing Basilisk’s pathfinding AI and decided to see how the game played with him able to turn around at any time. Well, now I know. It’s too hard. In addition to that, I also made it so that the player can’t jump into Basilisk’s square (Basilisk has to come into their square), which does keep the player from killing themselves by accident (especially when Basilisk first appears), but was mostly implemented to prevent an animation jump when the player character goes from their “moving animation” to their “getting eaten” animation mid-jump, which also caused the camera to jump.

Well, that’s it! That's the last Alpha update! Next time, I'm adding the last few little things that are missing, such as Basilisk's voice and a simple tutorial, then the game will be entering Beta! In the meantime, go check out the new version and try to unlock one of the new characters (you should at least be able to get Minotaur, he’s easy)!

Until next time, then! Just a little more to go...

EDITED 11/21/2018: Originally, this post suggested there would be another Alpha after this one before we entered beta. Then I got working on the next update and realized I was closer to being done than I thought.