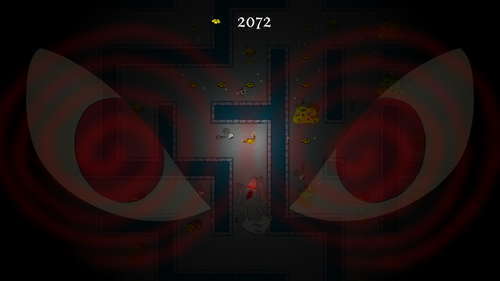 Hey, just a quick update on the game. I've reached a point where I realized that I need to finish this game quick and move onto something else, or I'm just not going to finish at all. Let's face it, I've avoided saying this in my blog, but I've always been thinking it in the back of my mind. Frankly, The Basilisk's Maze just isn't a very interesting game. It's just a time-waster game, like Minesweeper or Solitaire. I'd been planning to make it into a mobile-type game, like Crossy Roads, with lots of different characters to unlock and other little things to find, which would be neat and all, but it would require me to make all that. And to be honest, I've been finding even I don't have enough interest in the project to realize those goals, and if I don't move past this quickly and move onto a project I really love, I'm going to burn myself out on this and maybe even game development in general.

There are a few factors contributing to this, like personal insecurities, the usual, but I'm not going to talk about that. Instead, I'll talk about one of the more technical problems: namely, this game is asking a lot more work than it deserves! You see, unlike Minesweeper, this game requires tons of original artwork. Now, the people I've asked seem to like my drawings and my art style, but the problem is... I actually don't like drawing that much. I mean, I like drawing, I like setting down ideas in my head into a concrete form that I can show other people, that part I like a lot, actually. I'm just not a fan of the actual process, at least when I have to do, well, tons of it. I start getting sloppy, too, because I keep thinking about what's left to do and want to rush through whatever I'm currently doing. For any of my game development projects, easily the most draining part is when the next step requires me to draw a ton of new artwork. It's hard to even get myself to do it.

And guess what? With my old plan for this game, I'd be at that part now. My next prototype called for a shop screen with another animated NPC and a ton of new playable characters. Okay, the shop screen can be cut easily; I wasn't sure what else you'd purchase other than characters, anyway, so you could just accomplish that function from the main menu. The characters themselves, though? Not really anything I can do about that. Crossy Roads-type games have dozens of characters to unlock. I'd been planning on including about that many characters, but then I set about drawing the first one, and I realized that... no, there was no way I'd keep myself motivated enough to push through this. For every single one of those characters, I'd have to draw 1) an in-game, overhead sprite, 2) a full illustration for the character select option on the main menu, and 3) ANOTHER full illustration for the victory screen. That's a lot of busy work that adds up quickly, and the game's just not interesting enough to justify it. If I'm going to be spending this much time working on a game, it should be on something exciting and cool, not something disposable that most people will play once for a few minutes then never touch again.

So, what does this mean for the game? Well, for anyone who's not me, probably not much, because, frankly, I don't think anyone was paying attention to my little checklist of features-to-come anyway. I've cut down the list of stuff I'm adding down to three things:

As far as extra characters go, well, I've already set up the infrastructure for multiple characters, so it'd be a shame if we were just left with it simply being a male/female option. So, I've decided to have four more: a gryphon, a minotaur, a unicorn, and, of course, a dragon. I'm picking these ones because 1) each of those would be visually distinctive, even from the top-down perspective, 2) I use bones of these species as scenery objects, so it'd be a shame if that was their only representation, and 3) they should probably be fairly easy to draw, since they don't wear clothes. The gryphon, minotaur, and unicorn will be unlocked by winning a game with a certain amount of gold (you don't keep a pool of gold between rounds anymore; you'll just be given a score at the end). The dragon, meanwhile, will be a bonus for those who pay a small fee (like, one or two dollars; I still want some way to potentially make money off this game, and I figured a lot of people would want to play as a dragon).

Next, there will also be one last gameplay feature that will be the new focus of the next update (instead of the character shop that I'm not adding). You know the three maze settings? Maze size, Basilisk's Speed, and Basilisk's Gaze? Well, I've been wanting to replace the "gaze" setting for a while with something more interesting, and this is what I came up with: GHOSTS! Come the next update, some of the treasure piles will be HAUNTED! Try to collect one, and a ghost will give you a jump scare and slow you down, just like Basilisk's gaze! Beware of treasure with ghosts swirling around them!

Finally, Basilisk will also be getting a voice. Inspired by the classic arcade villain Sinistar, Basilisk will have a bunch of taunts he throws towards the player during a game, and maybe a few comments on the results screens and the main menu. Just to give him a touch more personality (and something for the "voice" volume slider on the options menu to affect).

Anyways, that's all. The bright side of all this is that the game is now retroactively in the home stretch of development! Only one or two more alphas, then it's time to put it in beta! Be on the lookout for Alpha 5.1: the Ghostly Update, coming in the very near future! Hopefully, I'll have it up in time for Halloween! Heck, if I work quickly, I might have the first beta in time for Halloween! That'd be pretty cool!