The Basilisk's Maze - The Golden Update

It’s time for a major update to The Basilisk's Maze! And it's not menus this time! Oh, wait, that's not going to make sense to the itch.io crowd. Um, long story short, I used to just post this game on my own website, and my only updates so far have been about menus. But no more! This time, it's all gameplay, baby! I made a new trailer to showcase the new feature and chronicle the continued misfortunes of Sir Elf. Check it out!

As of today, there’s gold in them mazes! Each maze is now filled with piles of treasure for you to collect before you head to the exit, so you can now shoot for a high score! Playing this new version, I was happy to see it added some depth I’ve thought the game’s been sorely lacking thus far. Trying to evade Basilisk without any other objectives quickly gets easy and boring once you figure out how best to avoid him. Now, however, there’s an extra risk-reward factor added that keeps things interesting and dangerous; you might put yourself into a bad situation that you wouldn’t have before because you were greedy for more treasure!

The rest of this article will go over the additions to the game in detail. If you're impatient, feel free to go check it out for yourself right now and see all the changes for yourself. It won't hurt my feelings. Well, maybe a little, but I'll get over it. I can understand, I can be a bit wordy.

Still here? Okay. Before I get into describing how gold works, I’d like to point out a few other changes. First off, as you start up the game, you may notice that the main menu music is different! In fact, I’ve given the game a full soundtrack now, courtesy of John Leonard French’s “Ultimate Game Music Collection,” a package of royalty-free music tracks for games available from the Unity and Unreal asset stores. I picked it up in a Humble Bundle, and I’m pretty pleased with how the tracks I picked out sound. They’re a lot better than anything I could’ve come up with.

After that, in the game itself, you’ll see that gold isn’t the only thing scattered across the maze floor. I also added a bunch of scenery objects I call “floor clutter.” They’re there to add a bit of variety to the otherwise empty catacombs. Most of them are skeletons of various species; either they were there before Basilisk, or he wasn’t hungry when he dealt with them. So maybe he, er, stepped on them or something. I might add more types of clutter once I think of other things that might be scattered around a place like this. 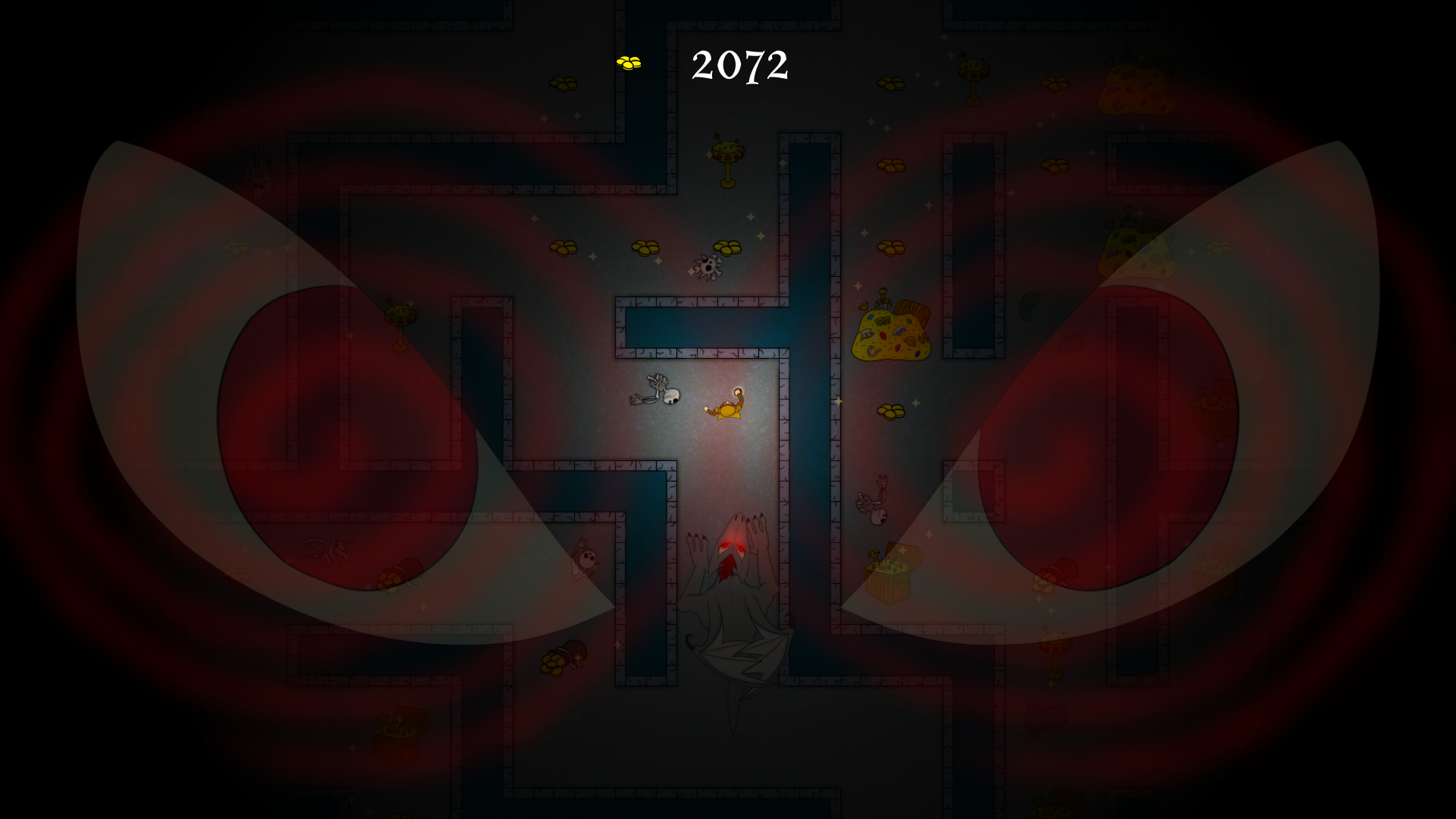 There’s also a sprite of a collapsed entrance that marks where you start the maze. It doesn’t have any effect on gameplay. I just thought the game needed an explanation as to how you got inside this maze in the first place, since before there was only one door in or out and it was locked from the inside. 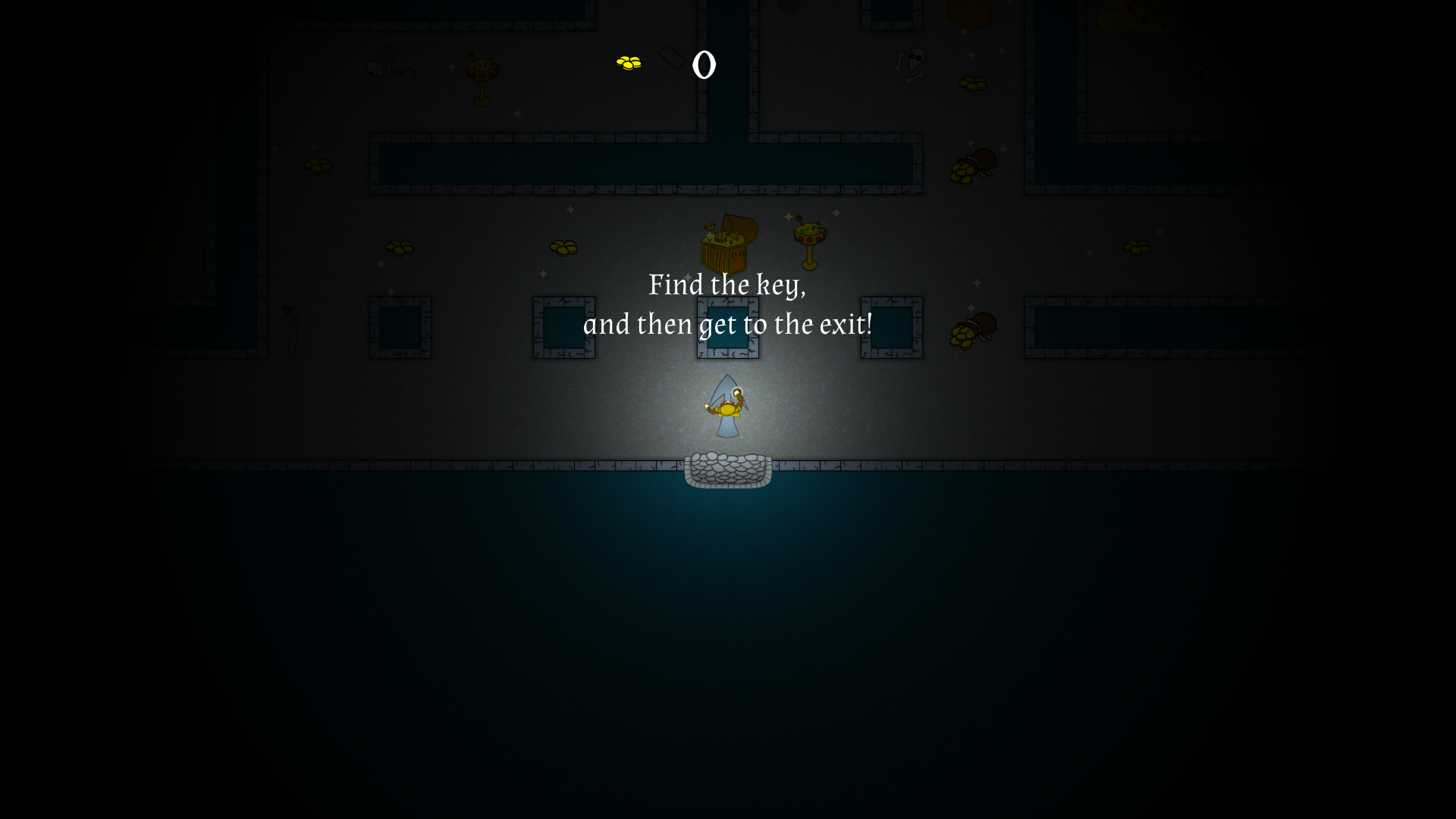 Oh, and the instructions the game gives you at the beginning have been moved toward the middle of the screen so they don’t get in the way of the new treasure counter.

As for other tiny changes, well, I changed the sprite for the sparkly particle effect on the key. It used to be the default Unity particle. Now it’s a sprite I made myself. And you probably wouldn’t have even noticed if I hadn’t pointed it out (heck, you may still not notice). I was going to tweak the effect in a later update, so it’ll probably be more noticeable then.

Alright, so with all that out of the way, NOW it’s time to talk about the gold! So, the way it works is that when the maze is generated, the game determines a certain percentage of the floor it’s going to cover with gold. This percentage is based off the combined difficulty of all three maze settings, with lower-difficulty mazes being sparsely covered with gold and higher-difficulty mazes being densely covered with gold (additionally, the two most valuable types of gold pickups only show up on higher difficulties). And then the level starts, and it’s time to go treasure hunting!

For now, the gold you collect during a maze only serves as a score, but in the next update, this gold will be added to a pool which you can then spend in the shop to unlock more characters (which means I need to start working on some new characters to unlock. And a shop screen. Man, why’d I make a game that needs so much artwork?! I don’t like drawing THAT much!).

Well, that’s all for now! Go check out the game! This new update makes it better than ever before, and it’s really starting to feel close to a finished product now! And be sure to be here next time for Alpha 5.1: The Shopping Update, featuring a handful of new playable characters and a new NPC to guide you through your shopping experience! See you then!